The History of Sony

The History of Sony

Where and how do you begin to tell the story of the PS4 controller? I feel like it should start with the story of Sony. In 1998, Steve Jobs said “The whole strategy for Apple now is, if you will, to be the Sony of the computer business.” Sony's story begins with Masaru Ibuka [1908–1997]. He graduated from Waseda in 1993, worked in movie film processing, then served in the Navy as a researcher during WW2.After WW2, he started a radio repair shop in the bombed out Shirokiya Department Store in Nihonbashi, Tokyo 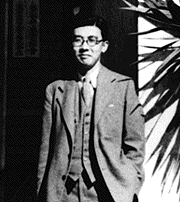 (In 1977, Masaru wrote a book titled "Kindergarten is too late!". Ideas include, & I paraphrase: "fathers should be as involved as mothers", "talk to your kids a lot", "children should communicate [and quarrel!] with other children", "ignite your child's interest", "music good") 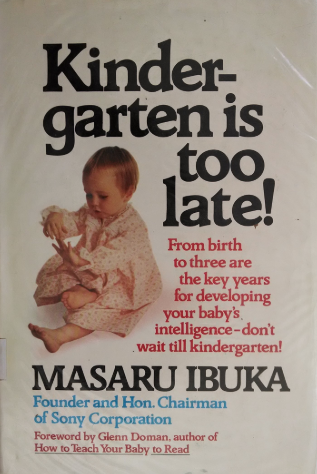 A year after Masaru started his radio repair shop, a wartime researcher buddy Akio Morita reached out to join him.Akio was the oldest son of a family that had been producing sake for 14 generations. He was passionate about physics, and abandoned his family biz to join Masaru 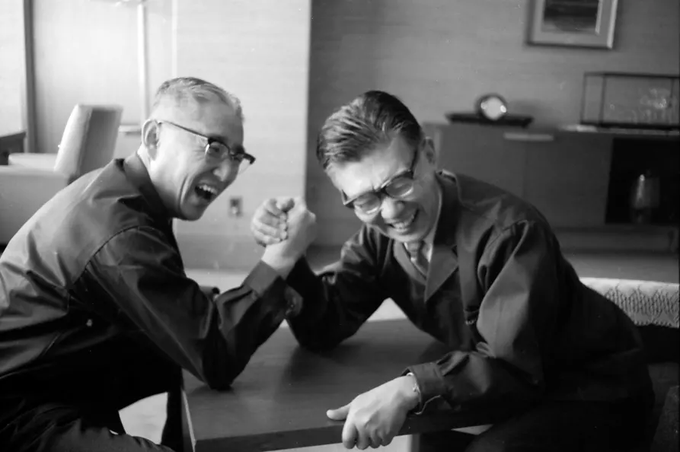 (It's interesting to think about the far-reaching effects of WW2. Masaru and Akio met during WW2. If not for WW2, there might not have been a Sony. If not for Sony, maybe no Sony Walkman. And since Sony was an influence on Apple, if not for WW2...? Butterfly effects are wild.)Let's take a step back. We know the founders, we know some of the context of the origin. What then? What was the path from that to the Sony Walkman, and the Sony Playstation? What's the timeline? How did they go international? How did they grow the team? What was the culture?

was cheap in post-WW2

, since supply exceeded demand now the war machine was offline. Did this incentivize the R&D of electronics?

repairs, Masaru also made a failed rice cooker – it either overcooked or undercooked the rice, and never went to market. 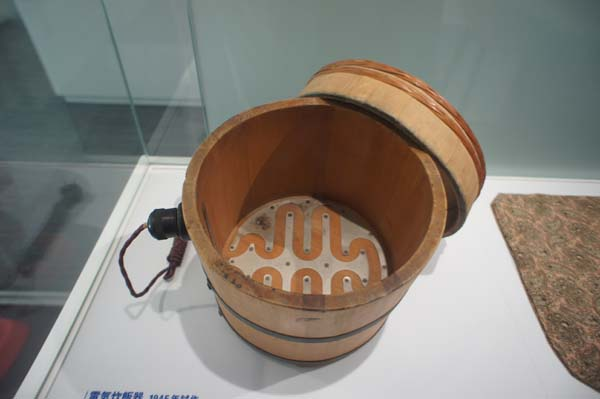 "Whenever Ibuka visited Tachikawa, the whole family would make such a big fuss, saying, "Masaru is here," and they would hide their clocks and other such items so as to prevent Ibuka from tinkering with them."

From the Founding Prospectus that Masaru drew up in 1946:

a) To establish an ideal factory that stresses a spirit of freedom and open-mindedness, and where engineers with sincere motivation can exercise their technological skills to the highest level
You can see quite glaringly in this story how much context shapes culture. Sony was clearly a company built in the aftermath of war. Their goal was to "reconstruct Japan and to elevate the nation's culture" – It's hard to imagine an American startup saying this in 2019
IMO, Sony 1945-1955 was basically a group of highly-motivated tech nerds struggling to do whatever they needed to do just to exist as a company. Sure, they made *some* money selling tape recorders (new tech at the time),but what they were REALLY doing, without realizing it... 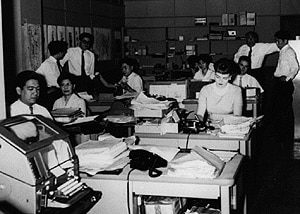 .....was positioning themselves in the right place to receive the TRANSISTOR.

These bois from Bell Labs won the Nobel Prize in Physics in 1956 for an invention that changed electronics forever. It's "basically" a silicon switch that can be turned on or off by applying a voltage to it.When Masaru "hide yo clocks" Ibuka learned about transistors, he *freaked*. He realized that transistors could turn electronics from furniture-sized monstrosities to portable, friendly devices that could fit in your hand. He licensed the tech for $25,000; it nearly bankrupted him.He put everything on the line, and in 1955, Sony released the TR-55.

It was small and portable, and in the process Sony improved transistor tech as well. Akio's physics background came into play, too – trace amounts of phosphorus greatly improved the transistors' quality. 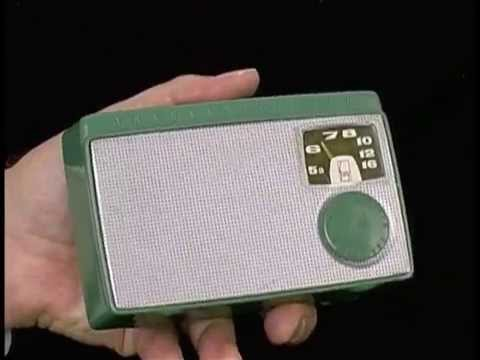 "The days of radios with cords are over."

"The TR-55 served as the template for almost all the portable gadgets we use today. Everything from the iPod to the Game Boy can trace its basic handheld design to the TR-55's form factor."(I want to take a moment to ponder how Akio Morita must have gravely disappointed his family by abandoning their 14th-gen Sake business– & how him abdicating his responsibility to his family ended up being a way for him to serve his entire nation, and really, the whole world. )
Names are always interesting. Sony started as "Tokyo Tsushin Kogyo", which is ~"Tokyo Telecoms Engineering". In 1950s Japan, being a "sonny boy" was sort of like being a 1980s yuppie (I guess?).Seems like Morita was the one who insisted on "Sony".In 1960, Sony made the world's 1st transistor

.While the engineering that went into this was amazing, I can't help but notice the product marketing genius, too. Notice the handle on top, making it feel more intimate & approachable. "TRULY PORTABLE!"

Around this time, a little earlier, an opera & physics nerd named Norio Ohga wrote a highly critical letter to Sony about the many failings of their tape recorder. Akio and Masaru were so impressed, they hired him as a part-time consultant, & eventually made him Sony's President
(I'm skipping over tonnes of history and details here. There were all sorts of ups and downs. At some point Sony tried to do a life insurance company, which didn't really work out. I'm not really grokking the nuances of Masaru and Akio's leadership transition. Pls forgive gaps).Anyway, after the TR-55, the next major breakthrough product from Sony was the 13-inch Trinitron, released in 1968 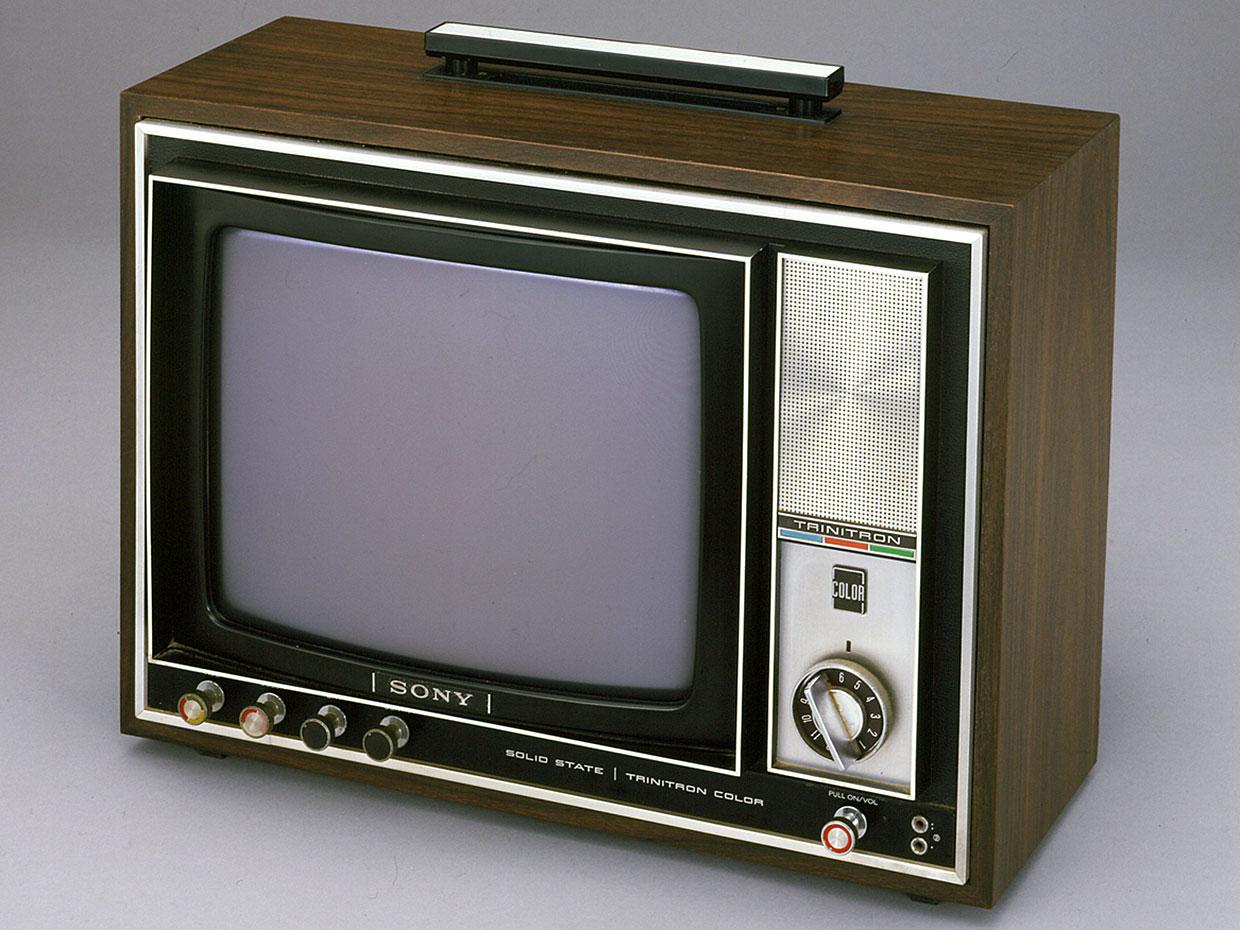 The Trinitron was so good, it won an Emmy. Seriously! There's a bunch of interesting technical detail that goes into this that I'm not going to get into.In 1975, Sony got embroiled in the Videotape Format War, which I could do an entire separate thread about. Sony made Betamax, which was higher quality but could only play 1hr per cassette. Another friend of mine (great writer!) argues compellingly that VHS won by optimizing for rentals

Then came 1979, and the Sony Walkman changed music forever. Some argue it changed the world – that it "kickstarted Generation Me", that it changed our relationship with music as well as with technology. It was lambasted as "socially alienating" and "destructive of relationships".Masaru asked his team to produce 60,000 units for the first run. They were worried it wouldn't sell, and made 30,000 instead. Sony has since sold over 400,000,000 Walkmen. Some credit the Walkman with launching the popularity of jogging outdoors. (I remember my sister had one!)

After cassette tapes came compact discs, and Sony had its hands in that, too.Sony met Phillips in Hanover, Germany, 1979 to argue about the size and shape of CDs. Eventually they settled on 11.5cm diameter & 74mins of storage.Why 74 minutes?

Anyway, you get it. Sony's a big electronics company, they've had some ups and downs, and they've had several big wins. They also broke into content and publishing – whole threads of content there I'm gonna skip. When does the PlayStation come into the picture???1994 – 1995: The PlayStation is released. It becomes the first video game console to ship 100,000,000 units. It was made after Nintendo broke off an attempted Sony-Nintendo partnership, and there's some interesting drama and backstory there...

This is Ken Kutaragi, known as the "father of the PlayStation", & described by some as "a Japanese Steve Jobs". Born in 1950, he was a straight-A student who grew up tinkering with electronics. He worked on many successful projects at Sony, including early LCDs & digital cameras.According to EuroGamer, Ken was unusually brash & outspoken, which endeared him to Ohga (who, if you remember, was himself a writer of angry letters). Watching his daughter play on her Famicom (NES) convinced Ken that gaming was the next big thing

Interesting drama: Ken secretly worked on the SNES audio chip while he was working at Sony. (If you've played SNES games like FF6, you know that SNES audio was exceedingly lush & beautiful for its time – so wow, respect, Ken). Ken was almost fired, but Ohga personally allowed it.

1. Ken is a very valuable Sony employee
2. Sony doesn't care about video games (yet)
3. Ken secretly develops a breakthrough audio chip for Nintendo, Sony accepts this (see 1)
4. Nintendo enters a partnership with Sony to develop the "SNES-CD", prototype pictured
Sounds kinda good, right? But wait... why was there never a SNES-CD, then? Where's the Nintendo PlayStation? Why wasn't it ever made?

Nintendo didn't like the terms of their agreement with Sony, and so they secretly went behind Sony's back to negotiate a more favorable deal with Sony's rival, Philips!!!And they announced this at the 1991 Consumer Electronics Show THE DAY AFTER SONY ANNOUNCED THE SNES-CD

How I'm imagining it went down:

Not too far from the truth, actually – tho Ken had more of an uphill battle, dealing with disapproval from older Sony executives as well.Ken won out; the Sony PlayStation was a massive hit. It was the 1st console to sell over 100m units, & is still a huge profit driver for Sony.Anyway... controllers!

(You see how I had trouble in school...) The first PS1 controller (left) was clearly made to compete with Nintendo's SNES controller (right). Directions on the left, 4 buttons on the right, select, start. The PS also has 4 buttons on top – L1, L2, R1, R2

The PlayStation's "Triangle Circle X Square" button system has become iconic; lots of people even get tattoos of it. And these symbols aren't entirely arbitrary, each of them has an intended meaning to it.Interestingly, there's some confusion about X and O meaning yes and no. I think X is supposed to be like, "execute", "x marks the spot", while "O" is like, a circular stop sign? Actually the more you think about it the more confusing it gets. 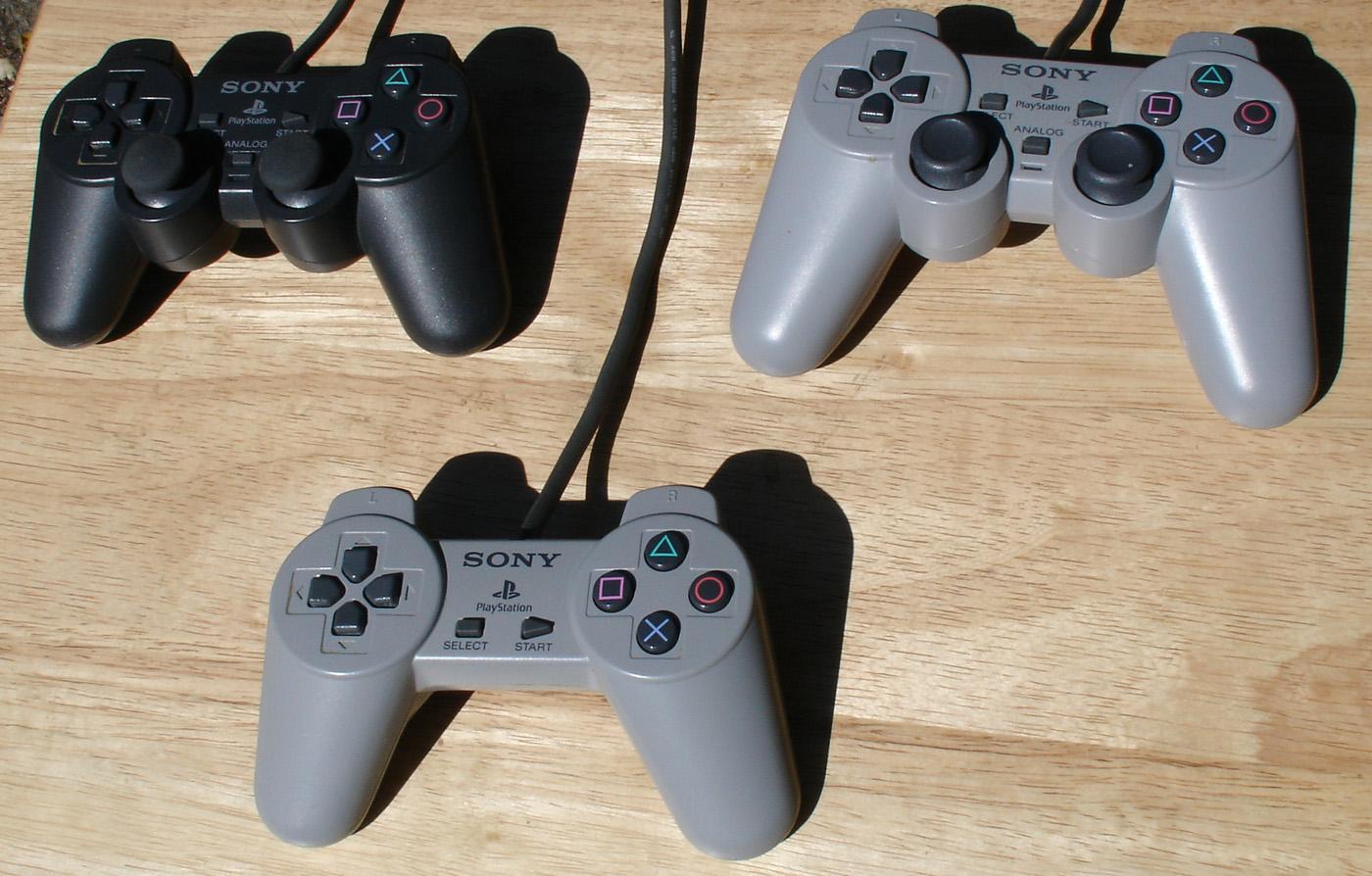 The PlayStation controller was followed by the Dual Analog controller (grey with the thumbsticks), and then the DualShock controller (black with thumbsticks). The thumbsticks allow for more precise and fluid controls, while the DualShock adds vibration.Relatedly, I remember being very entertained by this simple and revealing video of how analog sticks work. This talks about the N64 stick, but really all joysticks basically work this way. You can see people remove PS4 thumbsticks on YouTube, it's the same