The Life of Moritz Daniel Oppenheim : A Jewish Painter

The Life of Moritz Daniel Oppenheim : A Jewish Painter 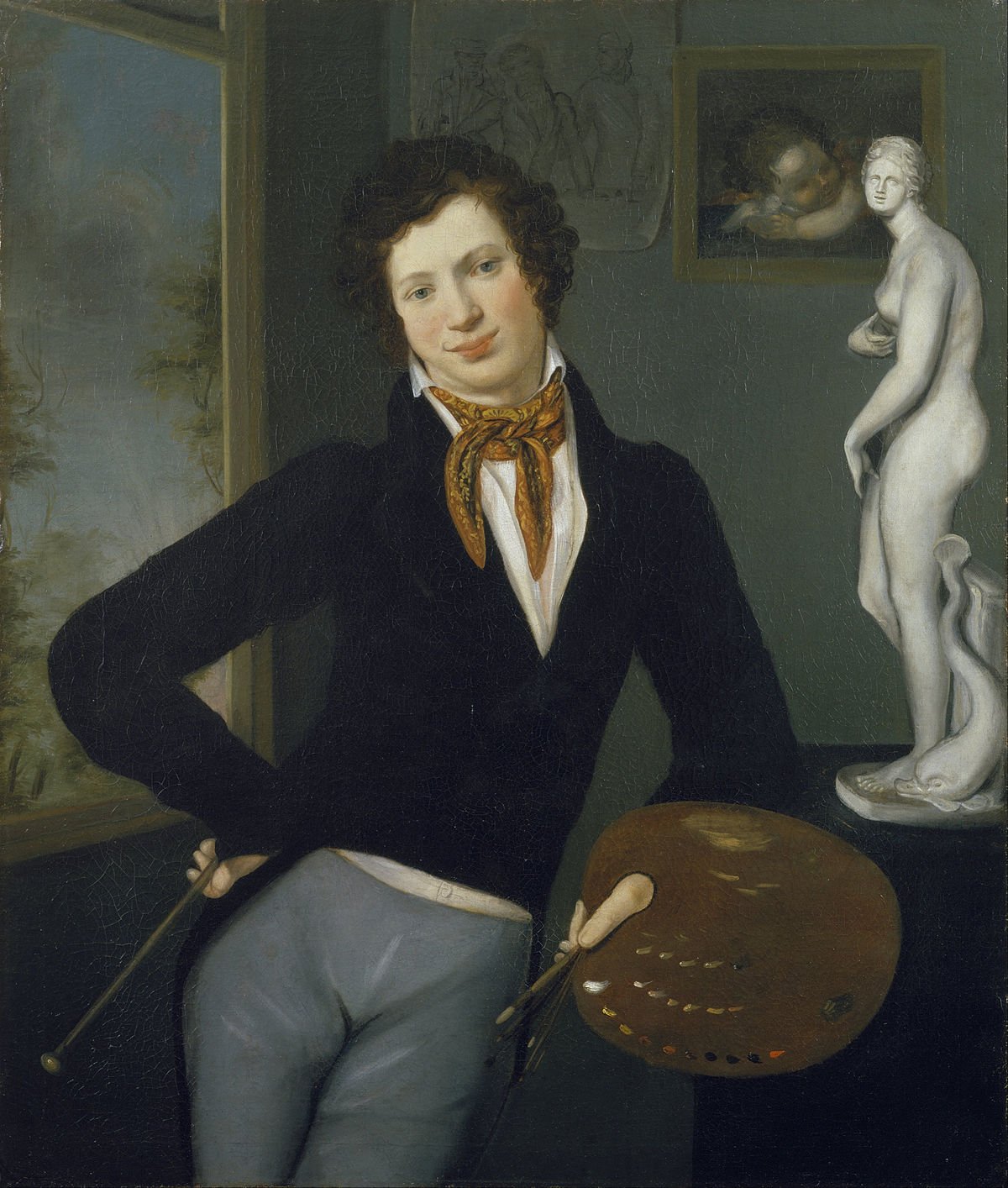 Moritz was born in 1800 in Hanau, Germany. He was part of the first generation of German Jews to live under emancipation, which included the right to attend universities. He was one of the first Jews in Europe to be classically trained as an artist.He studied first at the Munich Academy of Arts, enrolling when he was seventeen. Later he studied under some luminary artists in Paris and in Rome. By the time he was in his early 20's he was already a successful portrait artist.He painted commissions for gentiles and Jews alike, and was the official portrait artist of the Rothschild family. This is his portrait of Adolph Carl Rothschild. 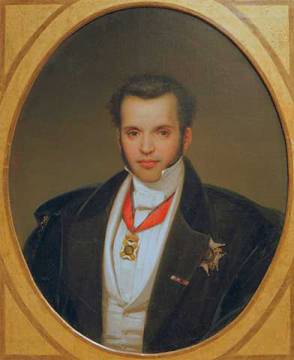 There were other Jews studying and making art at the time, but Oppenheim is often called "the first Jewish painter" - perhaps because while many of his contemporaries converted in order to gain acceptance in the gentile art world, Oppenheim remained openly and observantly Jewish.His later work portrayed European Jewish life. It was a subject he approached consciously and carefully - he purposefully worked to emphasize the richness and beauty of Jewish life and tradition, with gentile Europe as his intended audience.

He never portrayed Jews as miserable, or ghetto life as dirty and unpleasant. He painted joyous scenes, portraying Jews in their happiest moments. 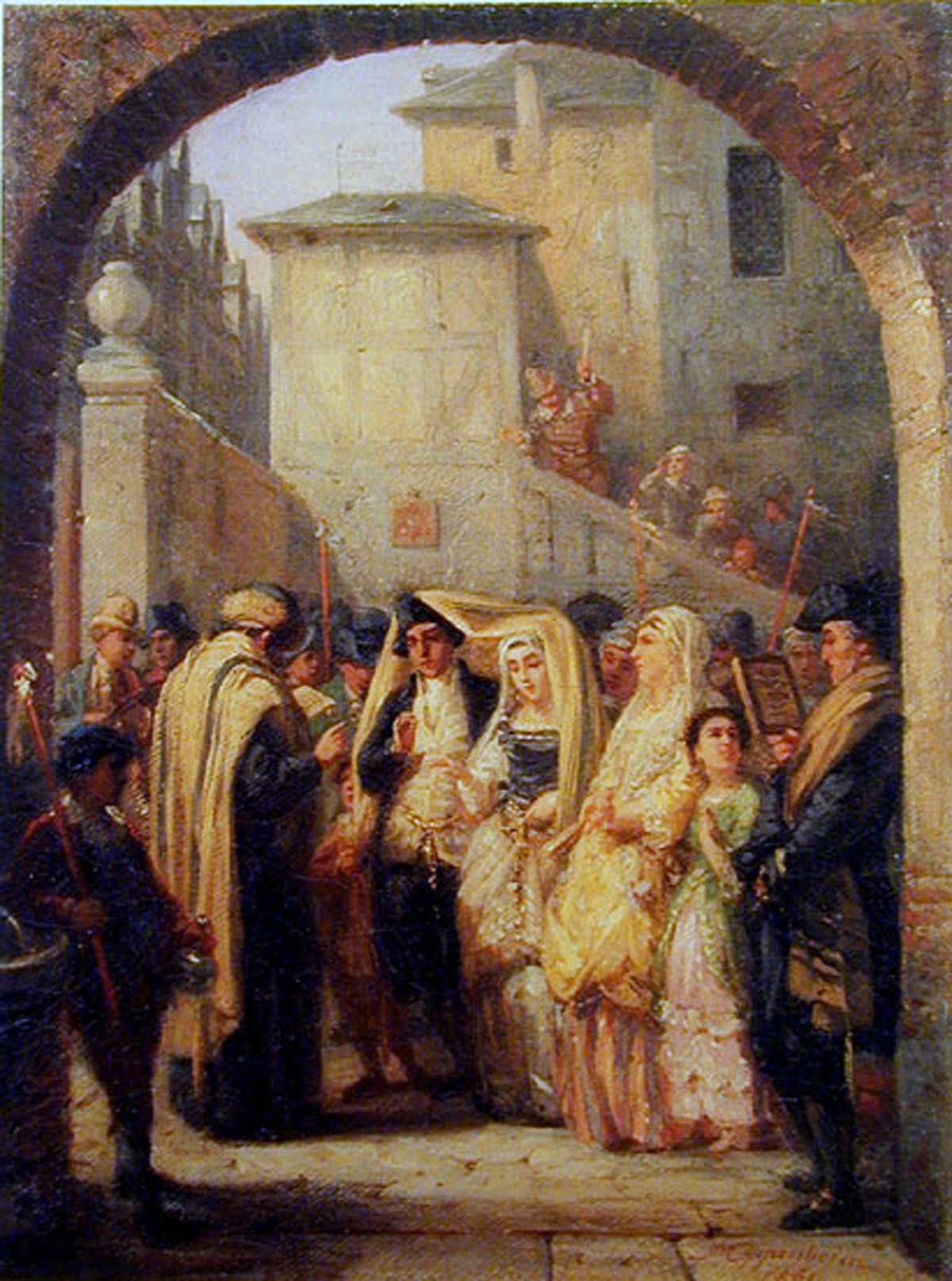 He painted the beauty and loving warmth of Jewish ritual and prayer - children being blessed, havdalah, a family on a Shabbat afternoon. I love the color in his havdalah painting especially. 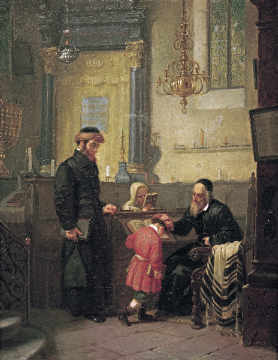 He painted to demystify Jewish religious practice - to undermine the perception of Judaism as arcane and incomprehensible, and to present it as an ordinary practice by an ordinary people. He painted the Passover seder, and the Rothschild family at prayer. 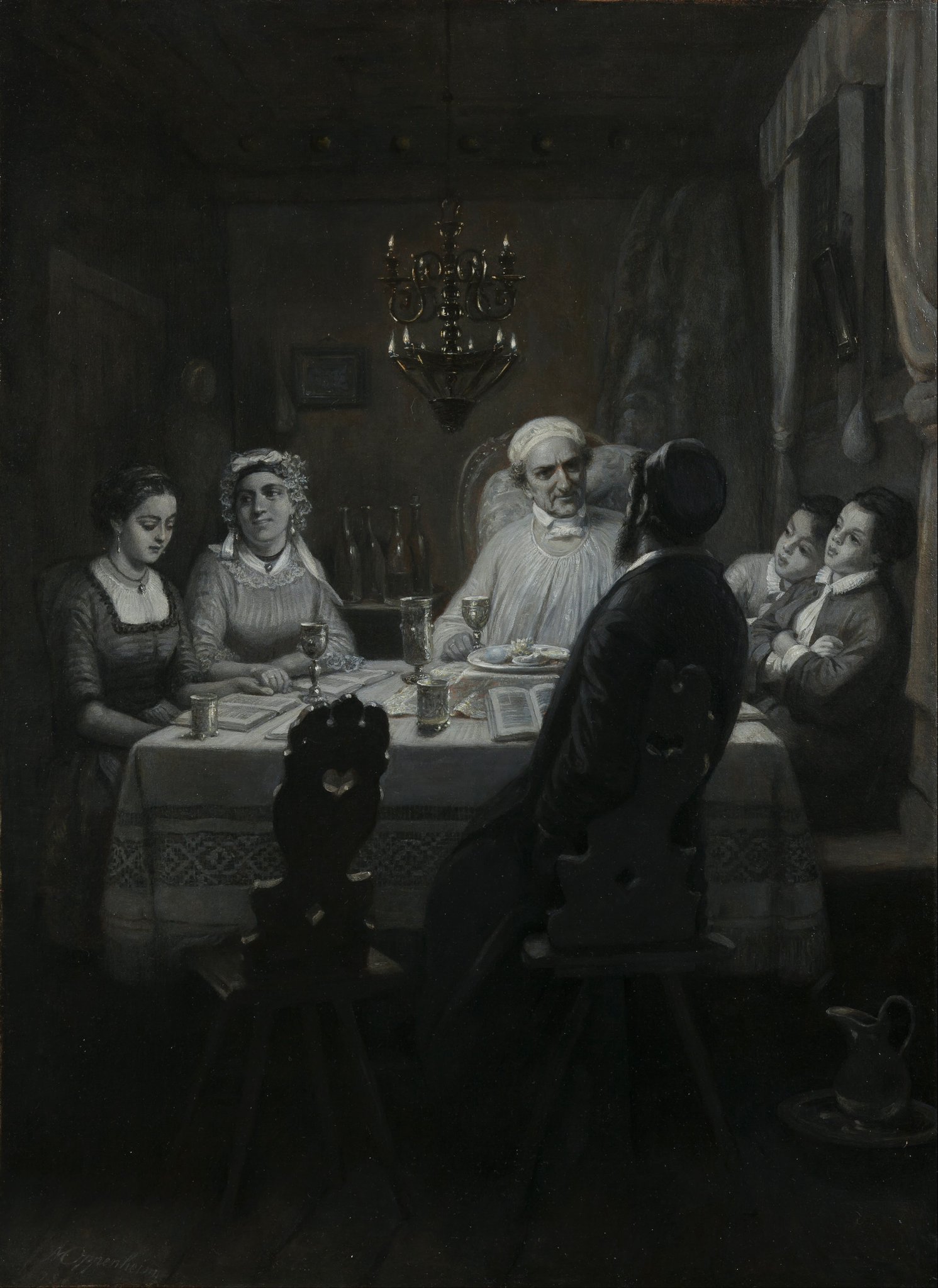 His works often included Jews reading, or teaching their children, or in deep conversation. He'd place a chessboard in the background - he portrayed Jews as distinctly Jewish, but directly opposed the perception of Jews as backward and uncultured. 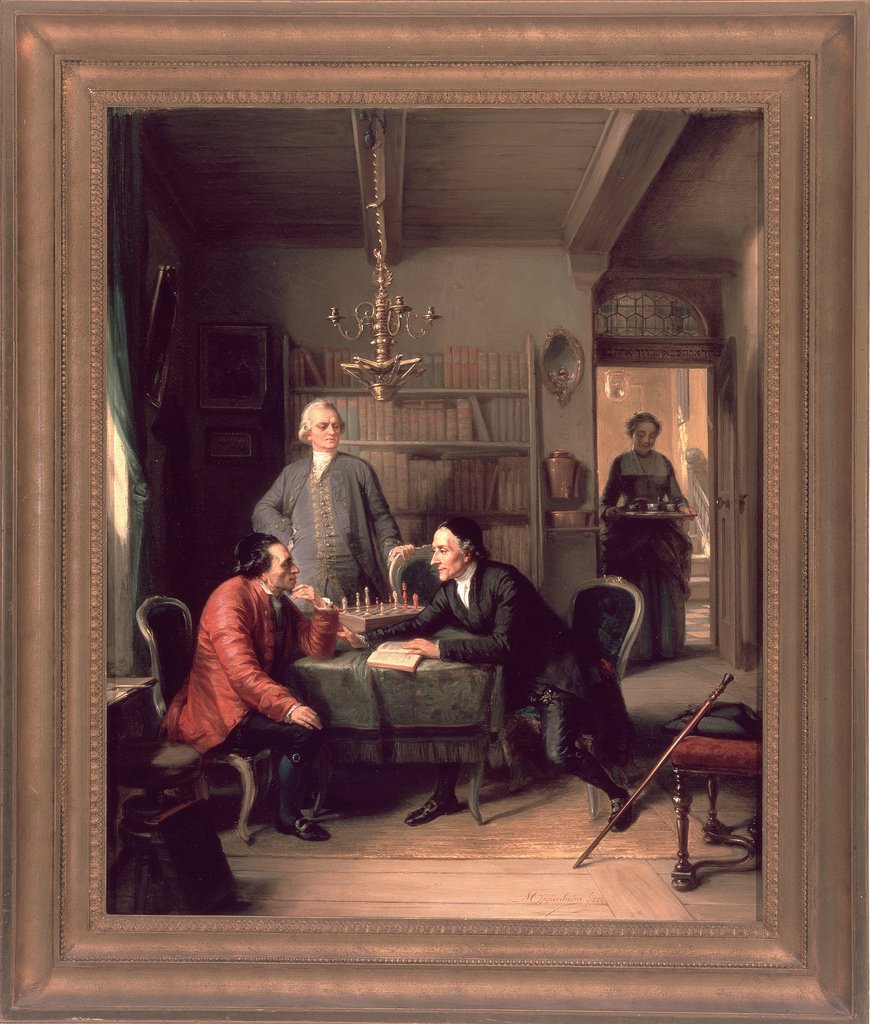 He acknowledged, also, the struggle between assimilation and retaining Jewish tradition. One of his most famous works is "Volunteer Returning...", portraying a Jewish volunteer soldier in uniform returning to a home and a table set for Shabbat. 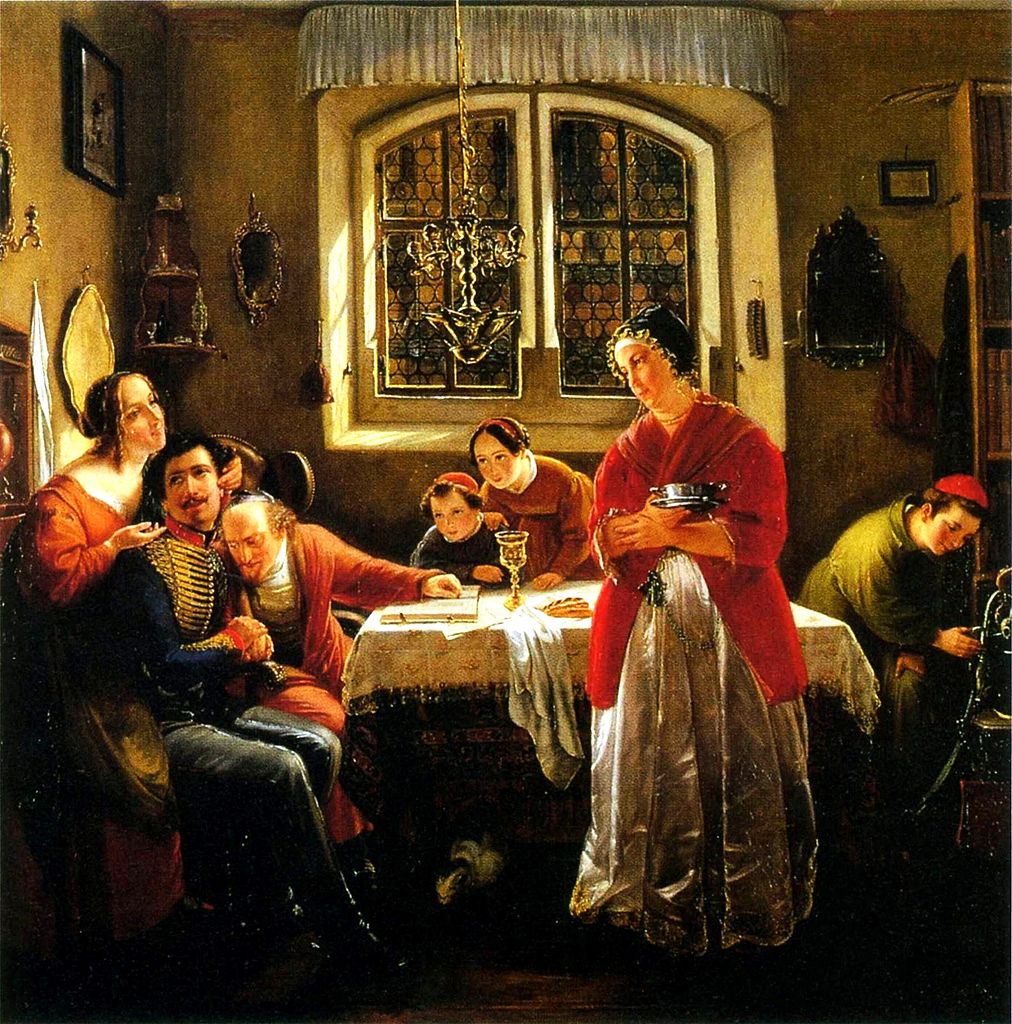 He died in Frankfurt in 1882. His work today hangs in the National Gallery of Art in DC, The Jewish Museum in New York and the National Portrait gallery in the UK.

Users browsing this forum: No registered users and 2 guests